The Trump administration was proposing to open nearly all US offshore waters to oil and gas drilling, reversing Obama-era regulations imposed after the 2010 Deepwater Horizon oil rig disaster in the Gulf of Mexico.

Interior Secretary Ryan Zinke claimed Obama administration bans on drilling in the continental shelf had cost the United States billions of dollars in lost revenue. The new proposal would make about 90 per cent of those waters available for leasing.

The plan gives energy companies access to blocks off California for the first time in decades and opens up the Arctic and Eastern Seaboard. Only the North Aleutian Basin — which President George Bush protected in an executive order — is exempted from drilling.

The Trump administration subsequently said it will not allow drilling off the coast of Florida, abruptly reversing course just days after announcing plans for a dramatic increase in offshore oil and gas exploration.

Interior Secretary Ryan Zinke said after a brief meeting with Florida’s Republican Governor Rick Scott that drilling would be “off the table” when it comes to waters in the eastern Gulf of Mexico and the Atlantic Ocean off Florida.

The change of course – just five days after Zinke announced the offshore drilling plan – highlights the political importance of Florida, where President Donald Trump narrowly won the state’s 29 electoral votes in the 2016 election and has encouraged Scott to run for Senate. 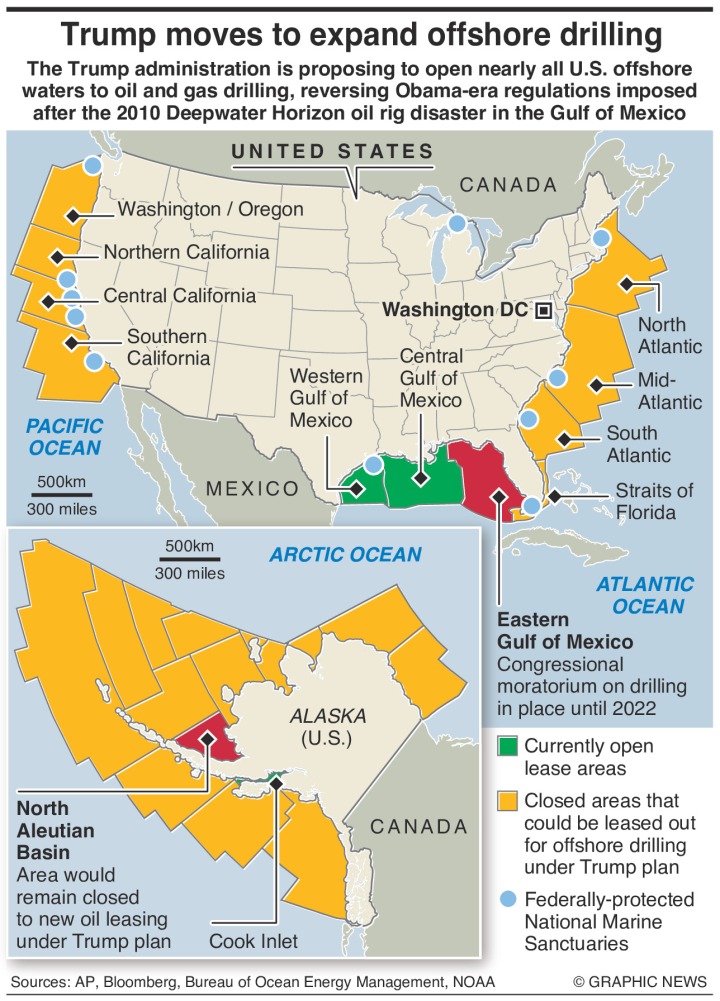