Scientists have found the first major evidence that Neanderthals, rather than modern humans, created the world’s oldest known cave paintings – suggesting they may have had an artistic sense similar to our own.

Published in the journal Science, a new study led by the University of Southampton and the Max Planck Institute for Evolutionary Anthropology shows that paintings in three caves in Spain were created more than 64,000 years ago – 20,000 years before modern humans arrived in Europe.

This means that the Palaeolithic (Ice Age) cave art – including pictures of animals, dots and geometric signs – must have been made by Neanderthals, a ‘sister’ species to Homo sapiens, and Europe’s sole human inhabitants at the time.

The researchers from Germany, UK, France and Spain used a state-of-the-art technique called uranium-thorium dating to fix the age of the paintings. The U-Th method involves dating tiny carbonate deposits that have built up on top of the cave paintings. These contain traces of the radioactive elements uranium and thorium, which indicate when the deposits formed – and therefore give a minimum age for whatever lies beneath.

“According to our new data Neanderthals and modern humans shared symbolic thinking and must have been cognitively indistinguishable”, concludes Joao Zilhao, team member from the Catalan Institution for Research and Advanced Studies in Barcelona. 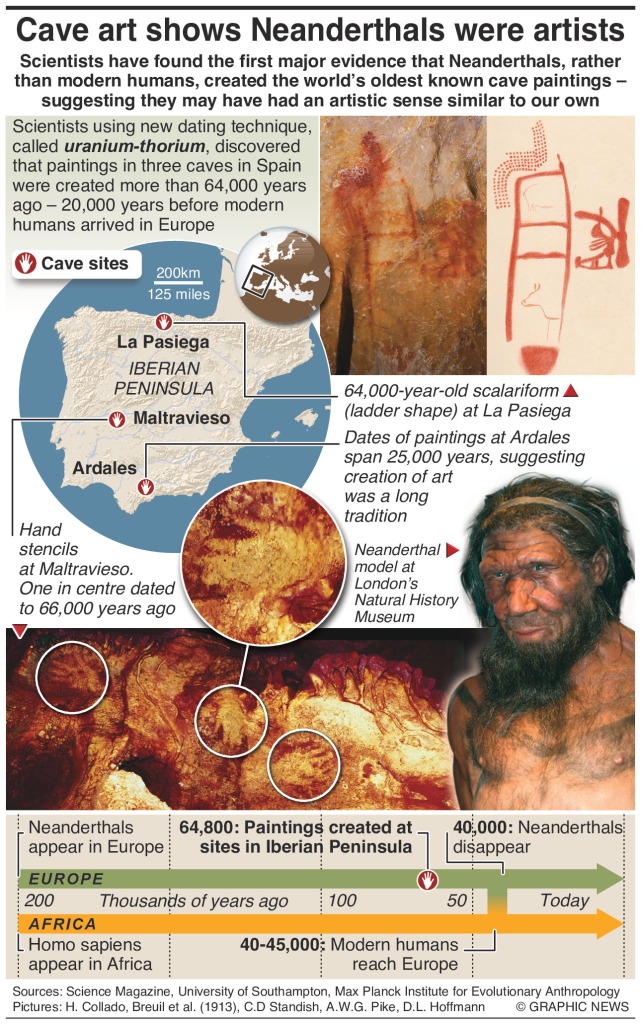